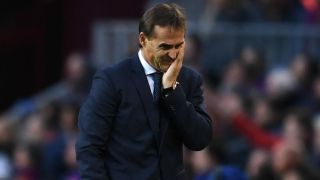 Any fans who feared the first Clasico in 11 years not to feature Lionel Messi and Cristiano Ronaldo would be a dreary affair should never really have worried.

European club football's biggest rivalry might have lost its two greatest players for Sunday's game at Camp Nou, but the entertainment in Barca's 5-1 victory was delivered in typically healthy doses.

None of that will matter much to Madrid, though. They started poorly, reacted brilliantly, and lost anyway. If they were not already, Julen Lopetegui's days in charge appear to be numbered.

Sympathisers could argue this game showed what Lopetegui would have to offer if he were given a chance. The problem is, it only happened when the result was effectively beyond his reach.

1 - This will be the first in all competitions without both Lionel Messi and Cristiano Ronaldo since December 2007, when Real Madrid won 1-0 in a La Liga match thanks to a Júlio Baptista winner. Memory. October 28, 2018

The Spain boss has not entirely been at fault for Madrid's wretched start to the season, but this defeat can justifiably be laid at his door, upon which president Florentino Perez will likely be hammering in a matter of hours with a notice of dismissal in his hand.

In short, he made three mistakes. Although it was widely reported he would be sacked after this week regardless of the result at Camp Nou, he set up his side to avoid a humbling, in a 4-5-1 formation that saw Gareth Bale deployed as a covering right-winger who covered neither attacking ground nor the space in which Jordi Alba likes to operate. The full-back's first foray forward saw Philippe Coutinho tap home to make it 1-0. That was number one.

Mistake number two was, perversely, highlighted by a positive decision. He shifted the system to a 3-5-2 at half-time to free up Marcelo and give Karim Benzema some attacking support. Barca, for all their first-half control, suddenly looked susceptible at every turn. When Marcelo converted calmly to make it 2-1, it looked like another memorable Madrid comeback was on the cards.

Unfortunately, moving Casemiro into a back three was never likely to give the defence the screen they required should Barca get another sniff at goal. They duly did with 15 minutes left, Luis Suarez scoring his second with a quite excellent header after running into the very position a midfield Casemiro would have been patrolling. Error number two.

Lopetegui's most damning moment came seven minutes later, when he took off the injured Marcelo for Mariano Diaz. Having recognised the importance of liberating the Brazil full-back, a player so often at the heart of Madrid fightbacks and displays of fortitude, he was forced to hook him when their need was dire. Marcelo did not look happy, but then, nobody in white did by this point. They certainly did not 60 seconds later, when Suarez completed his hat-trick with an impudent finish after Sergi Roberto robbed Sergio Ramos and Marcelo was not there to help.

3 - Excluding Lionel Messi, Luis Suarez is the first player to score a hat-trick in in La Liga since Romário in 1994. Exhibition. October 28, 2018

These are three decisions that do not look terrible in isolation. A counter-attacking set-up is often the best way to get a result at Camp Nou. Had Luka Modric's shot 56 minutes in crossed the line after hitting the post and made it 2-2, the half-time switch would have seemed a masterstroke. Sacrificing a limping left-back for a striker when chasing the game seems an acceptable change to make.

But this is Real Madrid. This is the Clasico. And this was a total battering. Lopetegui has tried his best, but it was too little, too late to rescue a result, and surely to save his job.