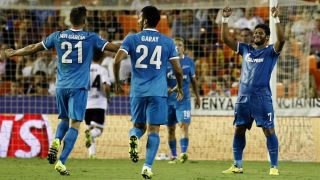 When the two sides met last time out in Group H, the Brazil forward netted a stunning strike – his third in the competition this term – to help the Russian champions towards a 3-1 victory.

That made it three wins from three for Villas-Boas' team and another triumph in France would secure their passage to the knockout rounds with two matches to spare.

Zenit have found the going far tougher in domestic action, with a listless 0-0 weekend draw at home to Mordovia Saransk seeing them slip 10 points behind leaders CSKA Moscow.

Hulk sat out that contest with a muscle injury and Villas-Boas conceded his attack lacked a cutting edge in the absence of his talisman.

"Yes he should be ready for the Lyon game," the former Chelsea and Tottenham boss told Zenit's official website

"We decided not to use him to protect him and his muscle injury so he will be ready for Lyon.

"We had the same number of opportunities we usually create but we didn't score.

"When Hulk isn't there, with these opportunities, we don't help ourselves. There were moments but we couldn't finish them."

Lyon lie second in Ligue 1 but are an identical distance behind runaway leaders and champions Paris Saint-Germain.

Back-to-back domestic wins over Toulouse and Troyes without conceding mean Hubert Fournier's team have enjoyed encouraging preparation for what is now a salvage job on the European front.

For the first time in their history, Lyon arrive at the midway point of a Champions League group campaign without a win to their name and another loss or a draw on home turf would see them eliminated if Valencia – already five points better off with six – are able to beat fellow strugglers Gent.

Fournier was clear that his team must improve on their showing against Troyes, who were down to 10 men after Corentin Jean's first-half red card, if they are to overcome Zenit.

"We lacked speed and precision to achieve our clear domination," he said.

"There was room for improvement. We need more intensity."

Aside from their concerns over Hulk, Zenit have no new injury worries for the game as midfielder Viktor Fayzulin (knee) remains absent.

Veteran midfielder Steed Malbranque (calf) is a doubt for Lyon and the match could be another to come too soon for defender Milan Bisevac (thigh).