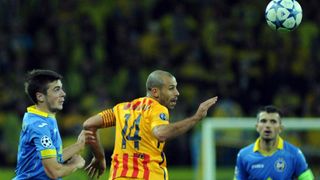 Javier Mascherano has admitted Barcelona have had defensive problems in the opening months of the 2015-16 campaign and was happy to keep a clean sheet in the 2-0 Champions League win over BATE on Tuesday.

The Catalan giants had kept just two clean sheets in their opening 13 fixtures of the season before the away win on Tuesday, conceding four goals against both Athletic Bilbao and Sevilla back in August.

Barca looked solid in defence against BATE though and Mascherano is hopeful they can keep improving in the weeks to come.

"We had a lot of chances against BATE and we allowed them few. That is a good thing because we have had defensive problems before," Mascherano told the Barcelona website.

"We have to keep growing to keep in the running in the league and get to the final stages of the Champions League and the Copa del Rey.

"The important thing is to get through, then we will try to finish first. At Barca our only option is to win and winning against BATE does not change anything."