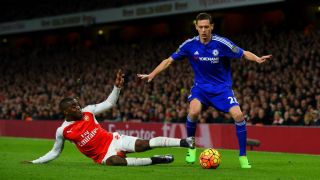 Nemanja Matic does not believe Per Mertesacker's dismissal was the deciding factor in Chelsea's 1-0 win at Arsenal on Sunday.

Down to 10 men and without Olivier Giroud, who was replaced by Gabriel in Wenger's attempts to shore up his defence, Arsenal failed to break down a stubborn Chelsea resistance.

However, Matic believes the Blues were already well on top by the time Mertesacker was sent off.

"I am sure even if Arsenal don't get a red card we would continue to play well because before that we were playing very well and we had some chances," the midfielder told the official Chelsea website.

"This was the real Chelsea and I believe that we can show again in the future that we deserve to play for this club. Of course we are not in a good position in the table but there are a lot of games until the end of the season and we have chance to show our quality.

"It was a big win because we are in a bad position in the table and every point for us is important, especially when you play against Arsenal in this stadium where it is always hard.

"We deserved to win, we showed our qualities and that we can play good football, and I am sure that until the end of the season we will show that we are still a big team and that we can win something."