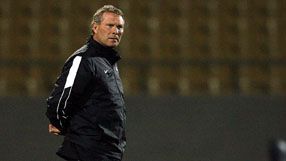 The midfielder smashed home from outside the box in the third minute after some poor defending from the Oceania champions, and while the All Whites had numerous chances to kill off the match, they were unable to make the game safe until Chris Killen stabbed home a rebound in the 90th minute.

McGlinchey then sealed the 3-0 win with a powerful drive over Mikael Roche in the third minute of added time.

The victory moved Ricki Herbert's undefeated side to 12 points and within sight of the final hurdle for qualification to their second successive World Cup finals.

"It was a pity we couldn't put the game away earlier because we created enough chances," said New Zealand captain Ryan Nelsen. "But the crowd stuck with us and that third goal was worth the price of admission.

"Tahiti were always in the game until the 85th minute and that's what makes it such a great game. You can control it and do everything but just not put them away."

The All Whites dominated possession and territory with Tahiti constantly giving the ball away in midfield. At one point midway through the first spell the All Whites had spent 98 percent of the match inside Tahiti's half.

The visitors grew into the game in the second half in chilly conditions in Christchurch, but their attempts on goal were weak or wayward and never tested goalkeeper Glen Moss.

New Zealand host New Caledonia next March with the result likely to determine who advances to face the fourth-placed team from the Central and North American and Caribbean Confederation (CONCACAF) in a two-legged play-off for a spot in Brazil.