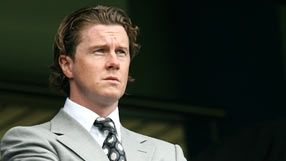 The Kopites could not build on their comfortable 3-0 win against West Ham, with Tottenham coming from behind to pinch a 2-1 victory at White Hart Lane courtesy of Aaron Lennon's stoppage-time strike.

Comparisons have been drawn between Spurs’ dismal beginning to their campaign in 2008 and Liverpool’s dire run of results this season; consequently placing them in the relegation zone for a short period.

Liverpool have, however, recovered in recent weeks since New England Sports Ventures took them over in October, resulting in a rise up the table to a still mediocre 10th.

McManaman is of the view that Liverpool can take confidence from Tottenham’s recent rise to success, and that Roy Hodgson should look to mirror Harry Redknapp’s achievements during his tenure at Anfield.

“When Harry Redknapp took over at Spurs, everyone thought they were down and out but now people are talking about them seriously challenging for honours,” McManaman told Goal.com UK.

“Liverpool only need to have a look at what Spurs have done to know they aren’t far away from competing again, despite what a lot of people might say.

“Harry kept it simple at Spurs when the previous manager had over-complicated things and that’s how Roy Hodgson will be thinking now.

“Confidence is the most important thing in football. We’ve seen already this season that it only takes three wins in a row – or three losses – to completely change a team’s season.

“Liverpool just need a couple of signings in January and all of a sudden it could look very different. The foundations are there with the likes of Pepe Reina, Steven Gerrard, Fernando Torres.”

The ex-England star added that he doesn’t understand the criticism of Hodgson’s tactics in recent weeks.

“I don’t get this criticism of Roy Hodgson as a defensive manager – it’s a red herring,” he said.

“He’s certainly no less attacking than the last manager and the criticism is unjust. But Liverpool supporters are demanding and he has found that out for himself.

“I don’t think you can say that any team which goes out with [Fernando] Torres, [Steven] Gerrard, [Joe] Cole, [Dirk] Kuyt and Maxi Rodriguez all starting is defensive.

“He wants his teams to be organised but great teams of the past have always been built on solid defence.

“I’m sure the manager will get them playing a more expansive style of football once he’s happy that everyone knows their role in the squad.”