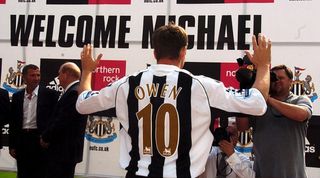 The former Liverpool and Real Madrid striker became the Magpies’ club record signing when he arrived from the Bernabeu in a £17 million deal in 2005.

But Owen revealed in his new book “Reboot – My Life, My Time”, which is being serialised in the Daily Mirror, that he viewed the move as a step backwards and regrets agreeing to join the north-east club.

“My move to Newcastle was one I really regret – I should have followed my gut instincts from the start,” he said.

“I didn’t want to go there – my heart was still set on a return to Liverpool.

He added: "From a career perspective, there was no doubt in my mind that a move to the North East was a downward step,"

“As unpalatable as that opinion might be to Newcastle fans, that’s more or less what I felt.”

Owen also pointed to the moment that his relationship with the Newcastle faithful fell apart.

“The fans never knew anything about any of the behind-the-scenes goings on which occurred during my time there but my relationship with them was damaged beyond repair when I was knocked out against Watford,” he said.

“When I got home, I switched on 'Match of the Day' to watch the game and I could hear Newcastle fans, my fans, singing ‘what a waste of money!’ as I’m being stretchered off.

“I can’t deny their actions that day changed things for me. No longer was I even going to attempt to ingratiate myself with the fans. Instead, I flipped it in a slightly more resentful way thinking, I don’t need to justify myself to f ****** Newcastle fans.”

Owen also laid bare his fractious relationship with club chairman Freddy Shepherd, who was caught on film saying that he would “carry Owen back to Anfield.”

“This kind of blind delusion is especially true of Newcastle United – which, as I reach for the nearest tin hat, is only a big club in the sense that it has a lot of fans and a big stadium.

“They’re historically not successful off the pitch, in fact quite the opposite mostly. And they’ve never really won much on it in recent times.”