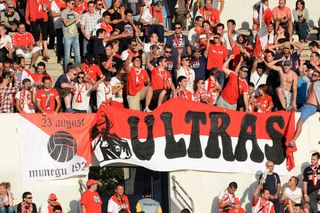 The newly-promoted Ligue 1 club were handed the punishment by the Ligue de Football Professionnel (LFP) in June following the ugly scenes that marred the end of their final home game of the Ligue 2 season against Le Mans on May 17, which confirmed their return to the top flight.

Fans invaded the pitch at the end of the 2-1 win, with the match referee attacked in the midst of the celebrations.

The principality outfit have spent large sums in the close-season as they aim to challenge champions Paris Saint-Germain for the Ligue 1 title, but despite the signings of Radamel Falcao, Joao Moutinho, James Rodriguez and Eric Abidal their star-studded side faced starting the season with a negative points total.

However, their appeal was accepted on Tuesday by the French Football Federation (FFF) and the punishment overturned.

The governing body said in a statement on their website: "The upper board of appeal of the French Football Federation held on August 7 has decided to cancel the removal of two points (plus one suspended) imposed by the Disciplinary Committee of the League (LFP) following the appeal by Club Monaco."

The decision means that Monaco will be allowed to keep all three points they earned with victory in their season opener at Bordeaux on Saturday, with Emmanuel Riviere and Falcao netting in a deserved 2-0 win.

However, Claudio Ranieri's men will still have to play one home game behind close doors, after the FFF upheld that sanction.