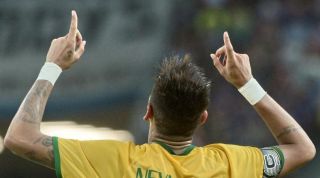 Silva, 30, lost the captaincy following Brazil's embarrassing finish to their hosting of the World Cup, as they lost 7-1 to Germany in the semi-finals before a 3-0 rout in the third-place play-off at the hands of Netherlands.

Silva has not played for Brazil since the World Cup, but has stated his desire to earn a spot under the new boss, who has guided Brazil to five straight clean-sheet wins.

And Neymar revealed he has spoken with his international colleague to clarify the situation.

"We've talked," he said. "Sometimes when we say something it can be interpreted in another way, but this is a complicated situation.

"We have a hierarchy and the boss here is our coach and we know that what he said is what he said.

"Me and Thiago have nothing else, we are good friends and this will not hurt our friendship.

"We are two men and we know what is the best for us and for the group, but nothing have affected our friendship."