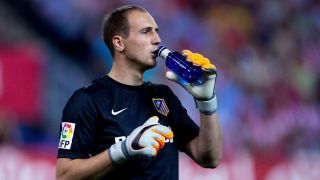 Atletico Madrid will need to find consistency and "a little bit of luck" to win a trophy this season, according to goalkeeper Jan Oblak.

Diego Simeone's men finished third in LaLiga last term, and then lost to rivals Real Madrid in the Champions League final, in Oblak's second year with the club.

And, having joined Atleti just after their 2013-14 league triumph, the Slovenian goalkeeper is hoping to play his part in a successful campaign.

Oblak insisted his side must perform at a high level throughout the season, while good fortune will be required to challenge for major honours.

"Of course, every season you start with these goals [to win trophies], but we know that it is not always possible because we are playing against great teams," he told Perform ahead of an International Champions Cup fixture against Tottenham in Melbourne.

"But we keep working and fighting, and I am sure that this season, again, we will have the possibility of winning something. It depends on us if we are going to reach our goals or not.

"I think many times in football you need a bit of luck. But you need to play great all season, it's not just one game or many games.

"But, in the end of course, if you are fighting for first place you need to have a little bit of luck as well."