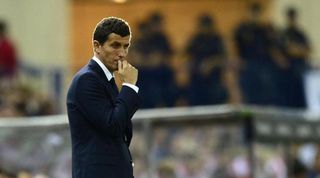 Gracia's team and Valladolid remain in the midst of La Liga's relegation scrap after the two teams played out a scoreless draw at the Estadio El Sadar.The result left Osasuna just three points above the drop zone in 16th spot, two points clear of Valladolid with five matches remaining.

Osasuna were wasteful in the opening half, with Alvaro Cejudo and Oriol Riera spurning a number of opportunities.

Valladolid had the best chance to claim maximum points seven minutes from time but goalkeeper Andres Fernandez was on hand to deny Javi Guerra, though Gracia said the hosts were unfortunate not to take more from the game.

"We have made danger and we have been close," Gracia said after the match.

"In the last few minutes they had their best chance. With what was at stake and the proposal we made we should have won."

Gracia added: "It was enjoyable at times but we are not successful, we have to take advantage of the chances we have."

Meanwhile, Valladolid coach Juan Ignacio Martinez was pleased with side's performance as they extended their unbeaten run to three games.

"You can do many reviews but the opponent and the dimensions of field has made things complicated," he said.

"It was a typical match this point in time, I would have liked to add three points but has not been."

Osasuna are back at home next week against high-flying Valencia, while Valladolid are on the road against Celta de Vigo.