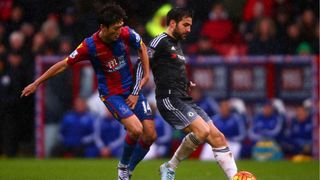 Palace were without Yohan Cabaye through suspension and Fabregas made the most of the Frenchman's absence by controlling the centre of the field at Selhurst Park.

The Spain international, heavily criticised by Chelsea supporters for his lacklustre form in the slump that saw Jose Mourinho part company with the club last month, dictated proceedings as Oscar, Willian and Diego Costa were on target to record the first win of Guus Hiddink's second spell in charge.

Palace boss Pardew was also without forwards Yannick Bolasie, Dwight Gayle and Connor Wickham through injury and he suggested that the number of key personnel missing for the hosts took a toll.

"We have belief about us but there's no doubt we're lacking a little bit of quality at the top of the pitch at the moment," he told Sky Sports. "That was evident. We got in some good situations but couldn't capitalise.

"It's our third game without a goal, so we're hoping a few of our top players come back in that area.

"[The first goal] was vital for us as much as them. We had so many key players missing we perhaps needed a little break or a chance to go in. The game could've been very different at 1-0, when Wilf [Wilfried Zaha] has the chance.

"But hats off to Chelsea, they were very, very good, a lot of their star players turned up and delivered."