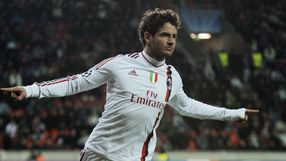 Pato came on as a substitute in the Champions League match against Barcelona on Tuesday but lasted only 13 minutes before limping with another injury.

Milan, who last month sent the player to the United States to try and clear up his constant injury problems, confirmed that Pato had suffered a problem in his left thigh and would undergo further tests in 10 to 15 days.

"AC Milan wishes to communicate that Alexandre Pato underwent medical scans today at the Galeazzi Orthopedic Institute in Milan," said the club in a statement.

"The scans revealed a muscular lesion in his left thigh. Between 10 and 15 days from today, the player will undergo more medical tests."

With the season due to finish in mid-May, Italian media concluded that he would take no further part in Serie A where Milan have a two-point lead over Juventus.

But his injury troubles began in the 2009/10 season, costing him a place in Brazil's World Cup squad.

Since then, he has played well in fits and starts. He scored two goals for Brazil at the Copa America last year but failed to inspire them beyond the quarter-finals where they lost on penalties to Paraguay.