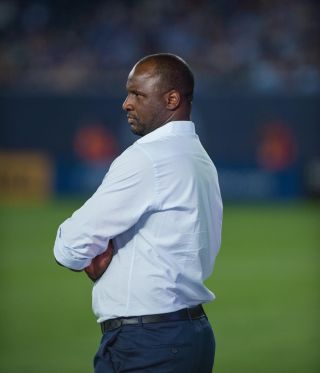 Patrick Vieira says he was flattered by Arsene Wenger describing him as a future Arsenal boss and admits he wants to manage one of his former clubs.

Vieira has just concluded his first season as a manager in European football, leading Nice to a seventh-placed finish in Ligue 1 with one of the youngest teams in France.

He had previously coached at Manchester City and spent two-and-a-half years in the United States in charge of Major League Soccer side New York City.

Wenger – who joined the Gunners at the same time as Vieira in 1996 – praised his fellow Frenchman last month for constructing his career “intelligently and patiently” and said he saw the 42-year-old as coaching Arsenal in the future.

“I’m really privileged to have worked under Arsene and him saying that is really flattering,” Vieira told Press Association Sport.

“If I manage Arsenal one day I will take him for dinner and I will pay the bill!

“He didn’t say it to put pressure (on me). It’s just flattering that the guy who spent over 20 years there thinks I have the quality to manage a big club like Arsenal one day.”

He was a World Cup winner with France in 1998 and appears as single-minded over the path of his managerial career as he was influential in the heat of the midfield battle for club and country.

“Since I was in Manchester City I had a clear idea about the next step for me,” said Vieira, who was linked with succeeding Wenger last summer before Unai Emery was appointed Arsenal manager.

“Moving from City to New York in the MLS and then coming back to the French league was the right decision.

“I have a clear idea of what I want to achieve, and I will try to take the right decision to get to the top.

“I want to take my time to get there, but I would love one day to manage one of the teams I played for in Italy or England.

“When you have an exciting league like in England, you always want to get involved. But I don’t put a time on it, because my work will decide if I deserve it or not.

“That is what will dictate if I deserve this kind of job.”

Nice found goals extremely difficult to come by this season, managing only 30 in their 38 league matches.

Yet they still finished one place and two points better off than in the previous campaign.

“There is more pressure in Europe than in America but I really enjoyed all the difficulties,” said Vieira, who was taking a training session at the Football Association of Wales’ national coaching conference at Newport within 48 hours of Nice’s final game on Friday.

“I’m finding my way but we finished the season seventh with the third youngest team in the league, with all our injury troubles on the field and no number nine.

“It’s been challenging, but we did a good season. The progress is never enough because we always want to do better, but to finish in that position is really good.”

Vieira’s final wish this season is to see Arsenal secure Champions League football next term by beating Chelsea in the Europa League final in Baku on Wednesday.

“They didn’t do it in the league (qualify for the Champions League) and this is the last chance for them,” he said.

“But hopefully they can win that final. Arsenal is a great football club and deserves to be in the Champions League.”