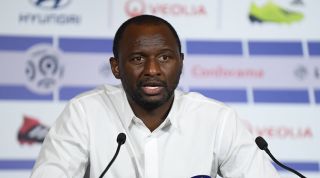 Arsene Wenger believes Patrick Vieira has what it takes to be a future Arsenal manager.

Wenger stepped down as Gunners boss at the end of last season, ending a 22-year association with the north London side.

Vieira worked with his compatriot for the best part of a decade, winning six major trophies as an Arsenal player between 1996 and 2005.

And Wenger thinks his former captain, who is currently in charge of Nice after a spell in charge of New York City, possesses the necessary qualities to one day lead the club from the dugout.

“I see him as the Arsenal coach one day because I think he is too young to go directly into international football,” he told Canal Football Club.

“I think his life will go through club football. He has constructed his career intelligently and patiently.

“He left when he was young, he went to New York, he is now in Nice and he has taken time to mature and learn his profession.

“And something you can't give: he has a natural charisma, he is both elegant and authoritative. He has passed through a difficult time at Nice but he showed no signs of weakness. It is in times of crisis you see the coach.”

Vieira’s Nice are currently eighth in Ligue 1 with five games of the season remaining.