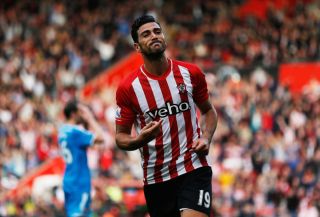 Pelle, the Premier League's player of the month for September, scored twice as Southampton stormed to their biggest Premier League win.

Having been gifted the lead courtesy of a spectacular own goal from Santiago Vergini, Ronald Koeman's men moved three goals clear by the interval.

Yet Pelle revealed the hosts, far from being content with their first-half display, were determined to kick on in the second period, which they managed by finding the net a further five times.

"It was an amazing day, an amazing day for everybody. We didn't start that well but luckily we scored in a lucky way," Pelle told Southampton's official website.

"We knew in the second half we had to be better because we were happy with the result but not so much with how we played, we wanted to combine it.

"We do feel sorry for the opponent. It is not nice to lose by so much, but it is a job to us, it's our game and it wouldn't be nice for the supporters if after 60 minutes we just stopped. We tried to do our best."

Pelle already boasts six goals in his first Premier League season and marked his international debut last week with a winning goal for Italy against Malta.

"It is an amazing week, [but] I always convince myself that it is never enough. I will not relax until the end of the competition," he added.

"I want to do better and better both personally and for the team. We know we are not first in the league [Southampton sit third behind Chelsea and Manchester City] and I am not top-scorer [Diego Costa and Sergio Aguero have nine top-flight goals each] , so we have to keep going and reach the top."