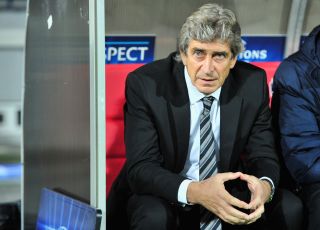 The big-spending English Premier League club have failed to progress from the group stages in the past two seasons, but goals from Edin Dzeko, Yaya Toure and Sergio Aguero raised hopes of an extended run in the competition this season.

It was Chilean manager Pellegrini's first European game in charge of City and he was delighted with the outcome.

"The first half we had a good match, we have three or four clear chances to score but I think the second half we played really well," he told Sky Sports.

"We made some movements so we could create space which is needed as with 10 players behind the ball it is very difficult to try and score so we had to get more from our game and we got three goals.

"Firstly, winning in the Champions League away from home is important, three points is important and we have to continue this.

"Secondly, it is important to have another clean sheet and also to score three goals is important, this is a good team at Man City."

City dropped points at Stoke in the Premier League on Saturday as Pellegrini rotated his squad, but the former Malaga boss insists he is not making success in Europe's premier club competition a priority.

"We don't have a priority," Pellegrini said.

"We know that Manchester City didn't play well in the Champions League last season, but the Premier League is also very important for us, we will try to continue in both with the same priority.

"The Champions League is very difficult and there are not any easy games and the players know that."