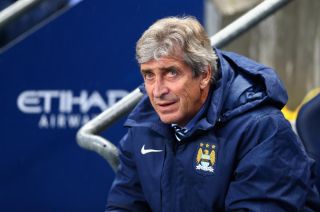 Defending champions City maintained their perfect start to the Premier League season with an emphatic 3-1 win at Etihad Stadium.

City, who finished two points clear of Liverpool last term, were led by Stevan Jovetic's brace and super-sub Sergio Aguero as the Manchester outfit sent out an ominous warning to their title rivals.

And even at such an early stage of the 2014-15 campaign, Pellegrini said he understood the importance of winning back-to-back games, having been forced to alter his pre-season preparations due to the World Cup in Brazil.

"It is important to have six points in the first two games, it was a difficult start for us with some [players] with 15 days working," the Chilean boss told Sky Sports.

"It was important to win, especially to win against [a] strong team like Liverpool."

Pellegrini added: "I think the way we worked for the whole game, we played a very good team, a very offensive team.

"We worked without the ball for 95 minutes and with the ball, [we] did enough to create three goals.

"We were not only patient but played with concentration and intensity. It is a pity they scored a goal, but that was a mistake."

Monday's outing also highlighted the quality of Montenegro international Jovetic after an injury-ravaged season in 2013-14.

Jovetic arrived from Fiorentina in a big-money deal but injuries limited the striker to just 11 Premier League appearances in the club's championship-winning campaign.

Though the City faithful are finally getting a taste of what the 24-year-old has to offer, having put his injury woes behind him with five goals during pre-season.

"He was unlucky with injuries and it was difficult to play two or three games in a row, he was patient and has worked hard to come again," said Pellegrini.

"I know he's a very good player, I am very happy for him because he deserves it."