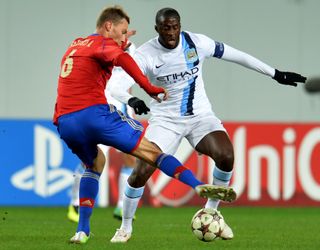 City midfielder Toure claimed to have been targeted by a section of the CSKA support during his side's UEFA Champions League 2-1 win at Arena Khimki on Wednesday.

The Ivorian reported the taunts to referee Ovidiu Hategan and urged governing body UEFA to take action after the game.

And Pellegrini believes Toure was right to be open about the incident, but refused to voice his own opinion on the issue.

"I have spoken with Yaya and he is OK," Pellegrini said.

"He did the right thing to say what happened and we will see what UEFA will do about it.

"UEFA has a special campaign against the racists. I think they are doing the right things to make sure there is no repeat but I don’t know what they are going to do in this case.

"But I don't think it is a good to keep talking about it (before the hearing). It is very important UEFA deal with this. They must take their decision about it."

Toure has indicated that black players could boycott the 2018 FIFA World Cup - which is due to be held in Russia - if insufficient action is taken to eradicate racism.

However, Chelsea manager Jose Mourinho, whose side welcome City to Stamford Bridge on Sunday, does not believe this is the answer.

"I respect Toure's opinion, but I disagree," Mourinho commented.

"The World Cup is the biggest expression of national team competitions - races, people from different parts of the globe, people from every continent. And the black players are very, very important for that.

"Who is more important, the billions of people in love with the game around the world? Or a few thousand that go to football stadiums and have disgraceful behaviour in relation to black players?"

"It's a bit early to do that (a boycott) because it's not proven what happened," the Frenchman explained.

"Russia itself has to fight against that and of course you want everybody to be active on that."