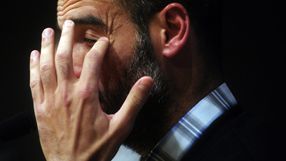 The 40-year-old former Barca and Spain midfielder was unable to attend his usual pre-match news conference on Tuesday because of the complaint and looked in pain during the champions' 1-0 win at Valencia on Wednesday.

The Catalan club, whose victory in Valencia extended their lead at the top of La Liga to 10 points ahead of Real Madrid's match at home to Malaga later on Thursday, said in a statement on their website Guardiola would be treated in hospital with drugs and an epidural.

"Pep is not feeling great and he got through the match as best he could," Guardiola's assistant, Tito Vilanova, said at a news conference after the game at the Mestalla.

"He is having a bad time of it and he doesn't even know where to put himself."

Guardiola's back problem comes at a crucial time for the Spanish champions.

They have away matches at Sevilla and Villarreal in coming weeks and will attempt to overturn a 2-1 deficit against English club Arsenal in their Champions League last-16, second leg at the Nou Camp on Tuesday.