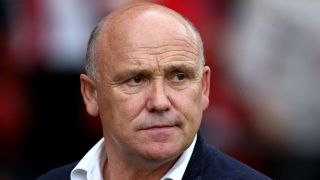 Mike Phelan has confirmed he has been offered the Hull City job on a permanent basis.

Phelan has been Hull's caretaker manager since Steve Bruce left the club in July, with an impressive start to the season earning him the Manager of the Month prize for August.

Hull have seven points from their four matches to date, losing only to a last-gasp Marcus Rashford goal against Manchester United, and Phelan confirmed he is mulling over the contract that is on the table.

"It's a case now of sifting through the offer and getting down to what hopefully will be further discussions," he told BBC Radio Humberside ahead of Saturday's home game against Arsenal.

"You do want parity with the Premier League, and going forward hopefully that's what will happen.

"There's still the takeover in the background and I find myself in the middle of that, trying to sort out my future. I don't know who is involved anymore and how far discussions have gone. It is possibly a frustrating thing from my point of view."

Phelan suggested recent signing Dieumerci Mbokani may be involved against Arsenal but hinted there would not be many changes elsewhere.

"The players who have had the shirts recently are in the box seat because they have been performing and it's up to them to continue with that," Phelan said.

"The one thing we have now is a great squad. Whether we change or not tomorrow will be a decision I have to make. We've got three immense games coming up and I'm sure those will test the squad to the full.

"Dieumerci is available and he will be part of the group. He's had 10 days to understand what this place is all about and he has fitted in well.

"The reason we brought him here is to add something a bit different. We haven’t had a target man at this club for a while. We have four strikers here now who can all offer different things and give us a bit of variety.

"Dieumerci is one of those who can change things if we need it."