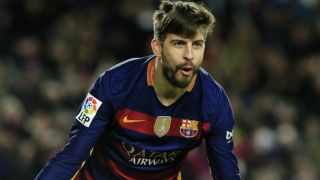 Barcelona defender Gerard Pique insists he is not worried over a possible investigation into his social media activity.

The Spanish anti-violence commission has reportedly compiled a report on Pique's Twitter posts and sent it to a disciplinary committee, which will then decide if it needs to be investigated further.

Pique is notoriously outspoken on Twitter, with a recent comment on Real Madrid's expulsion from the Copa del Rey starting a war of words with Spain international team-mate Alvaro Arbeloa, causing plenty of controversy.

The 28-year-old also mocked Espanyol fans earlier this month, saying they could not fill their own stadium, before Barca's rivals responded by displaying banners and making derogatory remarks towards his wife Shakira.

However, speaking after being named Catalan sportsman of the year for 2015 on Monday, Pique said news of an investigation did not bother him at all.

"They can study the tweets," he said. "They're there for them to study what they have to study.

"What difference does it make whether I think it’s fair or not when they’re just going to do whatever they feel like anyway?"

In regards to the banners Espanyol fans produced, Pique said: "I have nothing to say about the banners. If I had anything to say, I'd say it on Twitter."