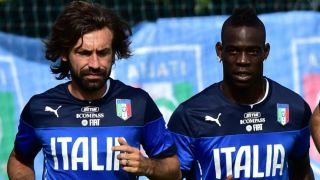 Andrea Pirlo admitted he has been left frustrated by the plight of Mario Balotelli, having expected the striker to be among the world's best by now, with the Italian icon insisting time is running out for his countryman to fulfill his potential.

The topsy-turvy career of Balotelli has stagnated, with the 25-year-old facing the axe at Liverpool after failing to earn a permanent move to Serie A side AC Milan.

Since winning the Premier League as a Manchester City player in 2011-12, having won three Scudetto's and a Champions League crown with Inter prior, Balotelli's career has hit the cross-roads, with Liverpool boss Jurgen Klopp telling the striker to find a new club.

Pirlo knows Balotelli's quality better than most following the pair's time together with Italy and the 37-year-old midfielder has called on the controversial frontman not to waste his talent.

"He frustrates me, but I do have so much affection for Mario," Pirlo told the Mirror.

"He is infectious to be around. When I used to see him walk into training for Italy, he would have this big smile on his face - and I would just burst out laughing - and start wondering what is he thinking, what is he up to?

"Mario should not just be a character the media write about for good stories. We shouldn’t forget what a special player he is.

Pirlo, now playing for New York City in MLS, added: "He has played for so many big clubs, it's easy to forget he's only 25.

"He still has time to make it at the very top. [But] He needs to pick his next club carefully.

"I have read things about him and China. With all respect to their league, Mario should not be going there yet.

"If he has two or three good seasons at his next club, he will still only be 28 and could join one of the top clubs in Europe.

"I don't have any advice for him anymore, he knows the qualities that he has. From this point, it's up to Mario."