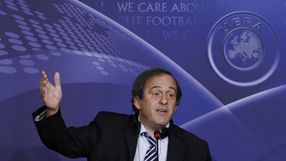 The former France captain, who has described match-fixing orchestrated by gambling rings as the biggest threat to the sport, said a few countries had introduced laws but others needed to follow suit.

"European football is in danger and I believe I could even say that the whole of sport in Europe is in danger," he said.

"The growing number of fixed matches connected to online betting is alarming, it doesn't spare any discipline and no country is safe.

"These fixed matches are orchestrated by criminal organisations," he added.

Platini named Italy, Portugal, Spain, Britain, Bulgaria and Poland as some of the countries which had passed laws to make what he described as "sporting fraud" a criminal offence.

But he added: "The incrimination of sporting fraud is still far from generalised. And this shortcoming contributes to the persistence of match-fixing where the transnational characteristics complicate the situation.

Platini said he also wanted national football associations to be recognised as the owners of the competitions they organise.

"Recognition of the rights of property and the incrimination of sporting fraud... these two principles constitute the base of a responsible, energetic and courageous intervention of the part of the legislator," he said.

"We've reached a point where public authorities can no longer elude their responsibilities."

He also spoke of his concern for the future of international football and urged countries to follow the example of European and world champions Spain, where the national sides are treated as a priority.

"The existence of the national teams is threatened. It is no longer guaranteed that players will be made available when they are called to their national teams.

"Don't let the national teams and innumerable benefits for civil society be sacrificed on the altar of merchandising.