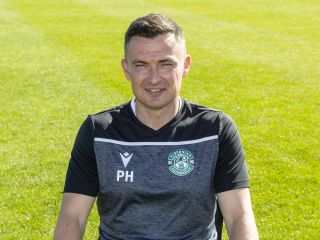 Hibs dropped to 11th in the Ladbrokes Premiership on Sunday after letting slip a lead in the final 20 minutes of their Edinburgh derby with Hearts at Easter Road.

Five of Heckingbottom’s summer signings started on the bench and the Hibs head coach looks set to make more changes for Wednesday’s Betfred Cup quarter-final against Kilmarnock at Rugby Park.

“You’ve got to look at that, without a doubt,” he said.

“For 70-75 minutes I know I’m going to watch the game back and be really pleased and when I get to that bit there’s going to be the same frustrations.

“You can understand the fans’ frustrations, but we go through that as well and it’s our job to make the changes. Whether they are short term in terms of shaking it up or long term, people have to step up.

“At the minute players have been getting opportunities, other players might get the opportunities and it’s up to them to step up.”