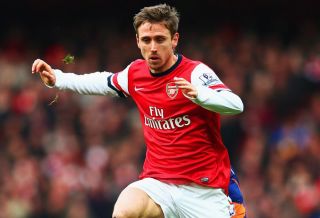 An inconsistent second half of the campaign has seen Arsenal slip from top spot in the Premier League on New Year's Day to battling for a fourth-placed finish with three games to go.

Arsene Wenger's side have also exited the UEFA Champions League in the last 16, but have a chance to end their nine-year wait for silverware in the FA Cup final against Hull City next month.

Rather than look on the season as a disappointment, Monreal believes it should be seen as a positive that Arsenal could secure a place in Europe's premier club competition and lift a trophy.

"I understand that the fans can be discouraged due to the fact that we had chances to win the title at some point this season," the defender told the club's official website.

"But finishing in the top four is a great objective and if we can add up some silverware by winning the FA Cup this season's outcome will be positive.

"It is true that we had a hard time. We didn't play well against the best teams and we conceded many goals.

"People shouldn't forget that a Premier League top-four finish is really complicated since many teams in the league have a great level, (and) clinching a Champions League spot for 17 years in a row is not easy at all."

Everton are challenging Arsenal for that final Champions League place, with Roberto Martinez's men only a point behind going into this weekend's fixtures.