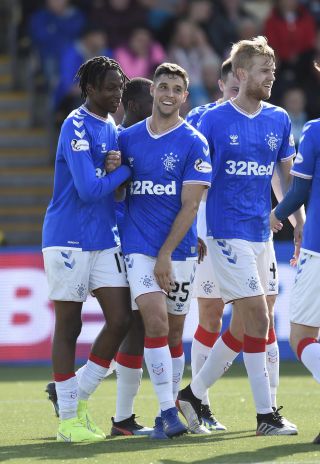 Rangers defender Matt Polster has vowed to make the most of the second chance he has been given by Steven Gerrard.

The USA international looked set to be part of Gerrard’s January clear-out having struggled for first-team action since arriving 12 months ago.

Livingston were rumoured to be monitoring his situation, while a move back to the MLS was mooted as it appeared the former Chicago Fire man’s stint in Scotland was coming to an end.

But with skipper James Tavernier out injured and rival right-back Jon Flanagan low on form, the 26-year-old was finally given his opportunity at Tynecastle on Sunday.

Polster was introduced for Flanagan at half-time and, while Gers slumped to a shock 2-1 defeat to bottom-of-the-league Hearts, he impressed enough to earn his first Ladbrokes Premiership start against Ross County three days later.

It was another encouraging display as he helped Gerrard’s team to a 2-0 win on Wednesday night and Polster has now been told he will be staying put until the summer at least.

But the American insists he never wanted to leave Ibrox in the first place.

“There’s been no offers that I know of,” he explained. “For me, I never wanted to leave the club and my goal was always to stay here and make it work here and be as successful as I could.

“I was never looking to leave. I read in the media that I am not going anywhere now. That’s what (the manager) has told me.

“Has the speculation been tough to deal with? Well people keep telling me that you just never know in football and anything can change. For me, I have just been working hard in training, trying to put my head down and wait for a chance.

“I have been working really hard in training and had to be resilient because it has been tough to find minutes. To be on the pitch and play in front of those fans last night was special.

“With each chance, I want to progress. That was my first 90 minutes in the SPFL so I want to build on that and start to get a rhythm.

“It has been tough because I haven’t started many games to get that rhythm so I am looking forward to the next game and if I get picked again I will try and do the same thing or do better.”