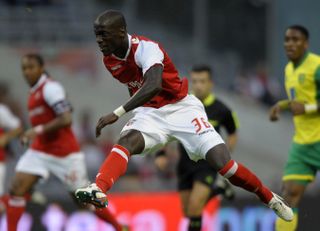 Edinho put Braga ahead from the penalty spot after 20 minutes at the Estadio AXA, before Mourtala Diakite equalised for the visitors 15 minutes from time.

It looked like the match was heading for a draw, but Brazilian defender Santos intervened in the dying moments to give Jesualdo Ferreira's side their second successive league win.

Braga began the game strongly and Portuguese striker Edinho gave them the lead from 12 yards with his first goal for the club since signing from Academica in the close-season.

However, Belenenses, who lost their opening game of the campaign 3-0 at home to Rio Ave, managed to stay in the game and thought they had done enough to earn a point when Mali international Diakite drew them level in the 75th minute.

But Santos had other ideas as he snatched the victory at the death to move Braga - who have now won five consecutive Primeira Liga games against Mitchell van der Gaag's men - level with Sporting, Porto, Rio Ave and Estoril on maximum points after two league matches.