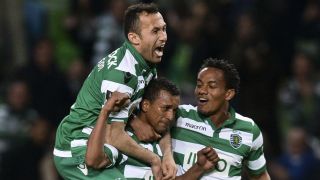 The hosts had to wait until the 52nd minute to break the deadlock, with Junya Tanaka the man on target.

Sporting are third in the table, nine points behind leaders Benfica and two shy of second-placed Porto – who have a game in hand.

Belenenses boosted their UEFA Europa League prospects with a last-gasp 2-1 win at Maritimo.

Abel Camara's 26th-minute opener was cancelled out four minutes later by Edgar Costa, leaving Pele to steal the points with a last-minute penalty.

Academica and Arouca lifted themselves out of the relegation zone by winning 2-1 at Estoril and 1-0 over Rio Ave respectively.

Marinho secured an early breakthrough for Academica and a Rui Pedro penalty gave them breathing space before Leo Bonatini netted five minutes from time to set up a grandstand finish.

Agustin Vuletich was the match-winner for Arouca, while Yonathan Del Valle's red card forced Rio Ave to play the second half with 10 men.