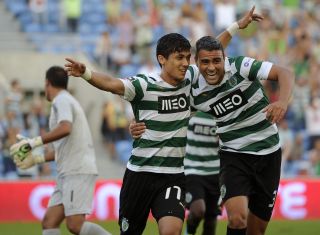 Having dropped points for the first time this season in the league last time out with a 1-1 draw against Benfica, Sporting Lisbon returned to winning ways thanks to efforts from Colombian Fredy Montero and Andre Martins in the space of nine minutes.
Montero's goal was his sixth in four league games this term and leaves Sporting two points adrift of Porto.

Olhanense's two-game unbeaten ended as a result, but they will look to get back to winning ways against Gil Vicente next week.

Sporting Braga returned to form after losing to Gil Vicente by beating Estoril 3-2 in the late game on Sunday, although the hosts did have to come back from a goal down after Evandro netted in the 17th minute.

A brace from Alan, including one from the penalty spot, put them ahead and then Custodio made it three 16 minutes from time. Seba scored a consolation goal for the Estoril.

Maritimo also hit form after half-time as they thumped four past Vitoria Setubal to win 4-2 thanks to goals from Heldon, Danilo Dias and a brace from Derley.

The Brazilian has now scored four goals in four matches for Maritimo. Vitoria Setubal did manage to give the home fans something to cheer after Rafael Martins found the net late on.

Elsewhere, Nacional lost 1-0 at home to Arouca, with Pintassilgo getting the only goal of the game four minutes from time. Arouca's win makes it two on the bounce after they started the season with back-to-back defeats.

Academica beat Belenenses 2-1 to move out of the relegation places thanks to second-half goals from Bruno China and Marinho.