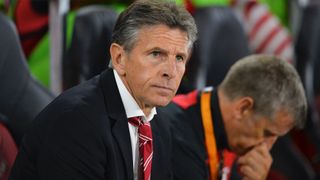 Tottenham crashed out of the Champions League with a 2-1 defeat at Monaco on Tuesday, while Leicester City booked a place in the knockout stages – their progress at odds with a listless title defence at home.

Puel's men have located the middle ground more effectively and could replace Sparta Prague at the top of Europa League Group K with victory in the Czech capital on Thursday.

"At the beginning of the season I said it would be a difficult season with this many games and to have the ability to keep a good balance between all the competitions," said Puel, whose team lie 11th in the Premier League and face Arsenal in the quarter-final of the EFL Cup at the end of this month.

"We have tried this with a young squad and perhaps we can do more in the Premier League with the results.

"It is difficult to keep a good lucidity and fresh players every time and to keep the good energy."

Southampton experienced a comedown from the 2-1 win over Inter in their previous Europa League match as they lost to Hull City the following weekend and Puel is wary of an Everton side who will have enjoyed a full week of preparation by the time they arrive at St Mary's on Sunday.

"The good energy is not just physical but the spirit [mind] is also important. To play the game after Inter Milan was very difficult and after this we lost at Hull City," he added.

"I believe we can make progress for the future and hope we can continue in all the competitions. It would be very interesting and important for this club because [the players] learn all the time.

"At the weekend we play against Everton and they have the whole week to prepare the game. For us it is about recovery between the games and we cannot work all the days between the games like Chelsea and Liverpool."

Winger Sofiane Boufal overcame a bout of illness to travel with the Southampton squad but captain Jose Fonte will miss out with a foot injury, while Dusan Tadic, who suffered a suspected broken nose when playing for Serbia against Wales earlier this month, could remain sidelined for the Everton match.

"Jose Fonte has a pain on his foot from when he made a tackle against Liverpool and he cannot play," Puel explained.

"Also, Dusan, I do not know if he can play in the next game against Everton."