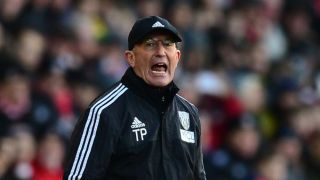 Tony Pulis felt West Brom's hectic schedule finally caught up with them on Saturday as Southampton cruised to a 3-0 victory at St Mary's.

After four games in 15 days, Albion were easily cast aside by Ronald Koeman's side as a double from James Ward-Prowse and Dusan Tadic's third secured three points for the hosts.

Pulis had no complaints after seeing his side's four-game unbeaten run in all competitions come to an end, but suggested their schedule played a big part in the defeat.

"You've got to give Southampton credit, they were the better team and deserved to win the game," he said. "But we looked a bit leggy.

"It'd be interesting to see how many teams played away midweek, and then picked up points away from home this weekend, because our players did look leggy.

"It just wasn't our day. All season we've done well away from home, today we just didn't and got punished. But as I say, it'll be interesting to see how teams have done with two away games on the bounce this week."

Meanwhile, Pulis confirmed West Brom could be without midfielder James Morrison for up to two months after he limped out of Wednesday's 2-2 draw with Chelsea at Stamford Bridge.