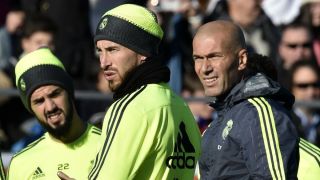 Zinedine Zidane's appointment as coach has had a positive impact on the Real Madrid squad, according to captain Sergio Ramos.

Saturday's 5-0 rout of Deportivo La Coruna got Zidane off to a winning start and Ramos is relishing further improvement over the coming months, with Madrid four points off the top in La Liga.

"The coaching change has been good. I hope 2016 is a big year for Real Madrid," said Ramos, who was speaking at the Ballon d'Or gala in Zurich.

Ramos' team-mate Cristiano Ronaldo lost out to Barcelona star Lionel Messi in the Ballon d'Or vote, making it the eighth year in succession that one of the dominant duo have taken the prize.

"I think both Messi and Cristiano are two extra-terrestrials," Ramos said.

"They are two megastars but maybe in the past year Leo had a little more."