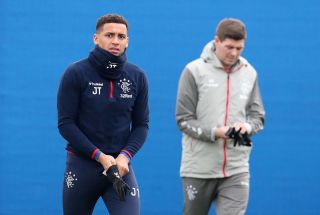 Rangers manager Steven Gerrard has called for his players to be cut some slack over media comments after recent declarations sparked criticism.

Skipper James Tavernier received criticism this week for admitting Rangers’ faults in comments attributed to him in the club’s official match-day programme.

In the captain’s notes ahead of the defeat by Hamilton, the full-back was quoted as saying: “Whenever anybody puts a bit of pressure on us in Scotland or gets in our face it seems to affect us too much.

“At the start of the season teams dropped off us and we were scoring four or five goals, but now they smell blood straight away and put us under pressure.

“We are not good enough domestically at the minute to react to that.”

Ryan Kent was also criticised after admitting last week that there was “less tension and less expectation” in their play in Europe because they were often underdogs.

And even first-team coach Michael Beale saw his comments picked apart after claiming the way European games were played and refereed suited a lot of Rangers’ players.

Gerrard clearly felt Tavernier’s comments should not have appeared in the programme in the way they were presented but argued that players and managers cannot be expected to say the right things all the time.

The 39-year-old said: “I think with my players, we are not always going to say the right things.

“From time to time, the players or myself or the staff, we are going to get things wrong. Especially in the heat of the moment.

“We are human beings, we are not perfect, we don’t pretend to be perfect.

“The players in that dressing room are at stages in their career where they are all trying to improve and learn and grow, none of them think they are there.

“So at times they are going to get things wrong and make mistakes.

“And at the same time we are at a club where we need protection at times. We need people to look out for us at times and help us.

“There’s things that I have said during my career, since I’ve been manager here, recently, that maybe I would have said probably a little bit different. Maybe I regret saying certain things.