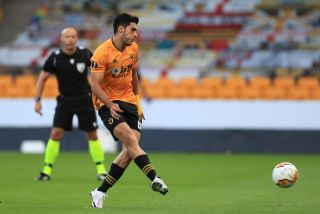 Raul Jimenez believes Wolves should target Europa League glory after firing them into the quarter-finals.

The striker’s penalty booked a last eight showdown with Sevilla as Wolves beat Olympiacos 2-1 on aggregate.

Nuno Espirito Santo’s side clinched  a 1-0 win at Molineux thanks to Jimenez’s eighth-minute spot kick on Thursday to squeeze into the tournament’s one-off format in Germany.

Wolves’ season has lasted over a year amid the coronavirus pandemic but Jimenez called for them to keep going with silverware on the line.

He said: “It feels amazing being in the quarter-finals. We’ve had a long journey to be here, but now we have to face it knowing that it will be difficult, but we are playing for something and we want it.

“We want to keep going, keep doing this as we know and keep going like this.

“Now we have to go to Germany, be focused on what’s coming and then think about the next game.”

Jimenez hit his 27th goal of the season, after goalkeeper Bobby Allain felled Daniel Podence, to send Wolves into the last eight of a European competition for the first time since 1972.

“This goal means everything. It’s everything we were going through, for the whole season. Since the beginning we were training, we were working hard,” he said.

“We started the Europa League in the qualification rounds and have had a big, big season, but we have to keep going.”

Wolves need to win the Europa League to qualify for the Champions League or they face no European football next season but Jimenez is aware of the challenge they face in Duisburg on Tuesday.

He told the club’s official site: “We know it’s going to be tough, it’s going to be difficult. We know that they are a good team and they play good, but we play as a team, as a group, as a family, like we were playing all the season.