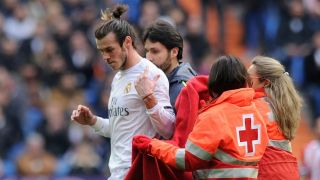 Real Madrid have confirmed Gareth Bale has suffered a muscle injury in his right calf.

The Wales international was forced off at half-time of Sunday's 5-1 win over Sporting Gijon after complaining of discomfort in his lower leg.

Former Tottenham star Bale had further tests on the problem at the Sanitas La Moraleja University Hospital and Madrid have released a statement to confirm "he has been diagnosed with soleus muscle injury in his right leg".

Initial reports in Spain have suggested Bale could miss up to three weeks of action as a result of the injury, although the club have simply stated his recovery progress will be continually assessed.

Madrid face Real Betis on Sunday before three more Liga matches against Espanyol, Granada and Athletic Bilbao prior to the first leg of the Champions League last-16 tie with Roma on February 17.

Bale opened the scoring in Madrid's thrashing of Sporting prior to his withdrawal.