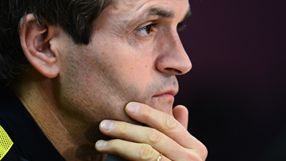 Adria, who is 15 and plays for Barca's youth team, posted a photo of himself and his father standing on a court on his Twitter feed. Padel is a racket sport similar to tennis played in Spain and Latin America.

"This afternoon I said farewell to the year playing a game of padel with a special person," Adria wrote. "Happy New Year to everyone!"

Barca announced last month that Villanova needed a second round of surgery following an operation to remove a tumour from his saliva glands in November 2011.

Assistant coach Jordi Roura has stepped in until the 44-year-old is well enough to return.

He was released from hospital on December 22 and began a course of chemotherapy and radiotherapy. Club president Sandro Rosell said on Friday he should be back midway through January and would alternate work and his treatment.

He was sidelined for around three weeks after the surgery last year before returning to his job as assistant to Pep Guardiola and then taking over from his close friend at the end of last season.

Under his leadership, Barca have made a record-breaking unbeaten start to their La Liga campaign and top the standings with a nine-point lead over second-placed Atletico Madrid.

Their opening match of 2013 is at home to city rivals Espanyol on Sunday.