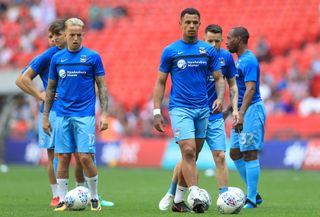 The Scottish top-flight’s bottom two clubs meet in Paisley on Saturday, with a win for St Mirren allowing them to move off the foot of the table and leapfrog Dundee with just seven games remaining.

Nazon said: “It’s a massive game and we have to take the three points, there is no other choice.

“If we win we will go above them and maybe closer to Hamilton depending on their result. This game is a final and we have to go for it.

“Of course, it would be a boost to move off the bottom of the table because after this game there are seven games left and the gaffer has said they are finals and we have to go for it. It has to be a win, three points.”

The 24-year-old was relegated last season while on loan at Oldham and, although he is again on loan from Belgian outfit Sint-Truiden, he is desperate to avoid the same fate.

He said: “I was at Oldham and unfortunately, we went down by one goal. So I’ve been in this situation before. Even though I was on loan a relegation is still on my CV.

“I’m a St Mirren player at this moment, so of course I would feel the pain if we were relegated, and I don’t want that feeling again.”

St Mirren manager Oran Kearney, meanwhile, is considering his penalty policy in the wake of watching Simeon Jackson’s weak effort in the 1-0 defeat by St Johnstone in midweek.

Kearney said: “I haven’t really decided on what way we’ll go with that. At this stage of the season it’s about not trying to put people in scenarios that can hurt them even more.

“The next penalty we get will be an interesting one because of what happened with the previous one and possibly if the same player is on it, it adds even more pressure to it. So it’s something we’ll have to think carefully about.”