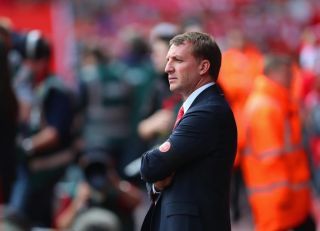 In the build-up to the game, much had been made of Chelsea's likely team selection, with the London club facing the second leg of a UEFA Champions League semi-final against Atletico Madrid just three days later.

Mourinho opted for a midfield containing Frank Lampard, John Obi Mikel and Nemanja Matic - all unavailable for Wednesday's game - with the trio given the job of screening the back four and neutralising Liverpool's attacking threat.

The plan worked to perfection and the hosts were restricted to shots from range as they struggled to break down a rigid Chelsea side.

Goals late in each half from Demba Ba - following a slip from Steven Gerrard - and substitute Willian sealed the win for Chelsea, who moved two points behind the leaders with two games remaining, and provided fresh hope in the title race for third-placed Manchester City.

Assessing Chelsea's tactics, Rodgers said: "Jose's happy to work that way, to play that way, and he'll probably shove his CV in front of me and say it works, but it's not my way of working.

"I like to take the initiative in games, try to dominate and let players express themselves.

"Our game is based on (being) offensive, being creative, as opposed to stopping."

Rodgers rejected suggestions that nerves had played a part in Liverpool's defeat, with the club seeking a first league title since 1990.

"It (Chelsea's approach) is a defensive style, the polar opposite to how we work, and hopefully over time our offensive mentality and aggression will get us long-term results," he added.

"It's not difficult to coach to put 10 players right on your 18-yard box but it's much harder to try and break through it and they defended it well.

"We were the team that wanted to win the game. It was difficult because they played with a back six right from the off.

"We found it difficult to break them down, but it wasn't nerves. It was just that final ball and maybe that bit of luck that we needed so we're obviously disappointed with the result."