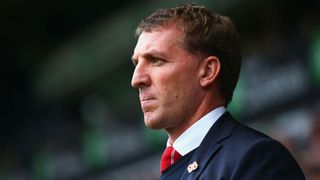 Liverpool manager Brendan Rodgers admits his side's goal tally in 2014-15 is a major cause for concern, and one that will be addressed with recruitment in the off-season.

However, with Suarez now at Barcelona and Sturridge enduring an injury-ravaged season, Liverpool have netted just 47 times in their 33 league outings this term.

Ahead of Tuesday's trip to Hull City, Rodgers admits the bare stats do not lie.

"If you look at the numbers, at the same point last year, we had 90 goals. You're nearly talking about a 100 per cent difference," he said.

"Defensively we've been strong, despite what people write and say, we had a 14th clean sheet [in Saturday's 0-0 draw at West Brom].

"We're [in the] top five defensively in the league. But obviously the critical area, as it was when I first came, was goalscoring - and it's something we need to improve.

"It's certainly an area we need to address come the summer. We have a top-class striker here in Daniel but he also needs help.

"It's been difficult, Daniel is a good lad who wants to play and work and help the team but it's been one of those seasons for him.

"He's been very unfortunate and we'll have to monitor day-by-day and see where he's at.

"When he's been fit, he's been brilliant, it's just getting him back on a consistent basis. Whether that's this season, or pre-season, has to be seen."

Mario Balotelli, Rickie Lambert and Fabio Borini are the other out-and-out strikers available to Rodgers, while Divock Origi is set to arrive from Lille - where he is currently on loan - in the close-season.