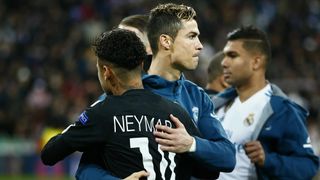 Ronaldo was at the double as Champions League titleholders Madrid came from behind to beat French giants PSG 3-1 in the first leg of their last-16 clash at the Santiago Bernabeu Wednesday, while Neymar was criticised for his subdued outing.

However, former Barcelona midfielder Xavi denied Ronaldo was superior to Neymar in the Spanish capital.

"They said that Cristiano was still better than Neymar," Xavi said in an interview with So Foot. "No, no, it's unfair.

"What did Ronaldo do in the game? He scored a penalty and a knee goal...

"But what about the dangerous situations created by Neymar? And the counter-attacks that he launched, the fear that he sowed in Madrid?"