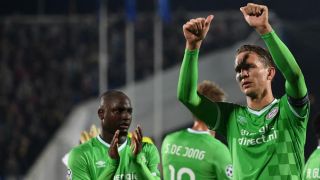 PSV deserved to take all three points from their Champions League clash with Rostov, according to Luuk de Jong.

Phillip Cocu's side were frustrated for much of the encounter, Dmitry Poloz netting twice for Rostov in the first-half – either side of Davy Propper's equaliser.

De Jong managed to level proceedings on the stroke of half-time with a close-range header, but PSV passed up a glorious chance for a winner when Propper had a penalty saved.

And De Jong believes that the result represents a missed opportunity for the Eredivise champions, who were beaten by Atletico Madrid on matchday one and face Bayern Munich next in Group D.

"It's definitely two points dropped," said De Jong. "We didn't start good today. After we got a lucky goal and after that we wanted to go on and work hard.

"They won too many second balls, and they scored a good second goal. We were lucky to get to 2-2 before half-time but we didn't get the goal we wanted or deserved in the second half.

"But when you score two away goals in the Champions League you need to reduce the goals scored against you.

"We wanted a good second half and we got it, yes we missed the penalty and also a few chances we missed, but we deserved the win."