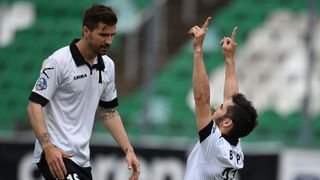 Torpedo Moscow claimed the win they needed to keep their hopes of Russian Premier League survival alive, overcoming Ural 3-1 in a meeting between two struggling sides.

Anything other than a win would have seen Torpedo consigned to one of the two automatic relegation places, but as it stands they still have a chance of going into a play-off to preserve their status.

After falling behind to an early goal from Pablo Fontanello, Torpedo fought back strongly and secured the required result thanks to a brace of penalties from Hugo Vieira - the first after Ural goalkeeper Nikolai Zabolotnyi had been sent off - and Dalibor Stevanovic's effort.

The victory ended a seven-match winless run, and saw them climb off the bottom and a point above Arsenal Tula into 15th.

Ural are one point better off in 14th, while the other relegation play-off berth is occupied by Rostov, who dropped in after wins for Ufa and Amkar Perm.

The latter's 1-0 defeat of champions Zenit sees them assured of safety, although Ufa still have work to do on the final day despite their 2-1 success at Spartak Moscow.

Rostov's ill-timed poor run of form continued as they lost 2-1 at Krasnodar - a fifth straight winless game - thanks to first-half goals from Roman Shirokov and Wanderson.

Arsenal Tula, meanwhile, need a win on the last day to have any chance of climbing into the relegation play-offs after they were twice pegged back in a 2-2 draw at Dinamo Moscow, who saw Alex Buttner dismissed.

At the opposite end of the table, CSKA Moscow remain second and in with a chance of UEFA Champions League qualification after they saw off Rubin Kazan 3-0 at home.