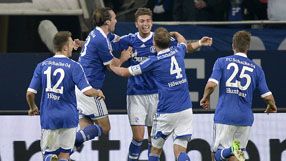 Their meeting is the highlight of a weekend in which Bayern Munich could set a Bundesliga record for the best start to the season by winning their eighth straight game, at a ground where they once suffered their heaviest away defeat.

Schalke have not beaten Dortmund in the Bundesliga in the last two seasons and have had to grit their teeth while watching their biggest rivals walk off with two successive titles.

"I will not have such a big mouth as last year," Holtby told Kicker magazine,

Schalke coach Huub Stevens, who likened his team's performance that day to a "school team", has also chosen a diplomatic approach.

"I hope we can show that the difference between us has become smaller," he said.

The second meeting of last season ended in a 2-1 win for Dortmund which effectively secured the Bundesliga title for them.

Reus, playing for Borussia Monchengladbach at the time, suffered a broken toe after Jones stamped on his foot, earning the United States international a six-match ban and fierce criticism in the media.

"This time I will try and stop him in a different way, but he is not the only player we have to stop," Jones told Bild newspaper.

Schalke go into the match in a slightly better position that Dortmund. The Gelsenkirchen team are third with 14 points from seven games, while Dortmund are one place and two points behind.

Both are already a significant distance behind Bayern, who have 21 points after seven straight wins.

"I don't care about Bayern's nine-point advantage," said Dortmund coach Jurgen Klopp. "We're playing our own season, just as Bayern are playing theirs. We'll see where we stand at the end of it."

Bayern will set a Bundesliga record of eight straight wins at the start of the season if they win at promoted Fortuna Dusseldorf on Saturday.

It would also extinguish unhappy memories of a December day in 1978 when a side including Sepp Maier, Martin Jol, Karl-Heinz Rummenigge and Paul Breitner suffered a record 7-1 defeat.

At the other end of the table, Felix Magath's VfL Wolfsburg desperately need a good result at home to Freiburg after slipping into the relegation zone.

Wolfsburg, champions under Magath in 2009, have only five points and two goals and have not won since the opening day of the season.