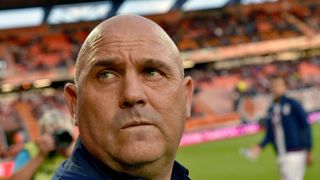 Frederic Antonetti has been sacked as Lille head coach with the club languishing in the Ligue 1 relegation zone.

Antonetti replaced Herve Renard on November 22, 2015, with Lille 16th in the table and led them to a fifth-placed finish and Europa League qualification, but he has lost his job a year later after a sluggish start to 2016-17.

Lille's European campaign was ended by Qabala in the Europa League qualifiers and they have lost eight of their last 10 games in Ligue 1.

Antonetti's assistant Patrick Collot will take charge of the team on an interim basis, with Lille heading to Nantes on Saturday.