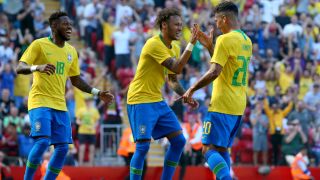 Brazil's squad will be considered failures should they not claim their sixth World Cup title in Russia, according to the legendary Rivaldo.

Tite's side, who breezed through qualifying, losing just once in 18 games, begin their campaign against Switzerland on Sunday.

Paris Saint-Germain forward Neymar - who was injured during Brazil's 7-1 semi-final defeat to Germany on home turf in 2014, is expected to be fit to start at the Rostov Arena following his recovery from a fractured foot that saw him miss much of the second half of the 2017-18 season.

And former Barcelona star Rivaldo, who tasted World Cup glory in 2002 and scored 35 goals in 75 appearances for Brazil, believes anything less than victory is unacceptable.

"I always say Brazil is the favourite in every World Cup, because of its tradition," Rivaldo told Express Sport.

"I was second place in 1998 and in Brazil this is worthless.

"In Brazil only being the champion is good, second place or fourth, like happened at the last cup, the players are criticised, the team.

"Brazilians only accept first place, not like some other teams, other countries with tradition, they sometimes land second, third or fourth place and are celebrated.

"It’s expected and normal, but we are experienced in dealing with that and knowing that Brazilians only care about being the champions."