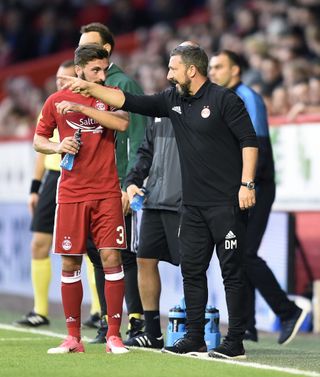 The Pittodrie boss admitted it was a “real blow” to discover his skipper had decided to move this summer after agreeing to join Frank Lampard’s side on a three-year deal.

But there are no hard feelings on McInnes’ part and he expects the Scotland midfielder to make the same kind of impact as former Dons midfielder Kenny McLean and ex-Hibernian star John McGinn after they made their own moves south last year.

McLean is on his way to the Premier League with Norwich, while McGinn is hoping to join him as his Aston Villa side limber up for the play-offs.

Derby have their own play-off ambitions, but whatever division Shinnie ends up in, McInnes is confident he will be a success.

“I’ve had a while to prepare myself for the inevitable,” said McInnes. “It’s a real blow.

“I need to say that the club did everything we possibly could to keep Graeme with us and Graeme has recognised that.

“Ultimately he’s got an itch he wanted to scratch in England and that was always our biggest fear and challenge.

“I fully understand his reasons. It’s with a heavy heart that he’s going to move on but that’s the nature of the game and we wish him well.

“I’ve no doubts that he’s capable of going down there and making the same impression on their dressing room and their team as he has on ours, which was huge.

“McLean and McGinn are two great examples (of what Scottish players can achieve down there).

“It was brilliant to see Kenny go down there and now become a Premier League player and that is the pull for Graeme, he’s looking for a similar pathway. McGinn has obviously had a fantastic season at Villa too.

“I think a lot of English clubs still view the Scottish league with a degree of suspicion and wonder if the quality is there.

“But there is no doubt we have some top players who could more than make an impact down there and Graeme is one of them.”

McInnes has another eight first-team players whose contracts expire next month.

And the Dons boss agreed he has got the biggest rebuilding job of his six-year reign to look forward to this summer.

However, he added: “With the support of the board we feel we can recruit players who will come in and make us competitive.

“It’s easy to get disheartened when you lose player after player but the nature of my job is to make sure we stay competitive on the pitch, so we’ll make sure we recruit smartly.”

Shinnie will miss Friday night’s Pittodrie clash with Scottish Cup finalists Hearts but should have recovered from an ankle knock in time to say his goodbyes against Hibs on the final day of the season.

McInnes’ team sit level on 61 points with Kilmarnock as they chase a Europa League slot, and ahead of facing the Jambos he said: “Hearts have done great to make it to the cup final and there’s a bit of envy there that we don’t have that to look forward to.

“But I’m looking at it like we have two cup finals left and that’s how we’ll treat it.”