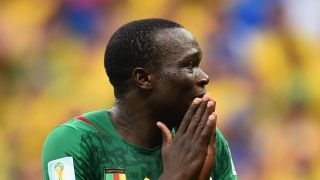 South Africa and Cameroon cancelled each other out for the second time in three days as Tuesday's Africa Cup of Nations qualifier ended goalless.

The Group M rivals shared the spoils in a 2-2 draw in Limbe on Saturday, and were again evenly matched at Durban's Moses Mabhida Stadium.

Returning Cameroon captain Vincent Aboubakar spurned two presentable chances - as well as being fortunate to escape a red card for a wild lunge on Andile Jale - as both nations missed out on the opportunity to collect a valuable win, with Gambia and Mauritania also drawing 0-0 in the pool's other fixture.

Cameroon remain top of the group with two games left to play, but South Africa's hopes of qualification are getting ever slimmer, as they stay four points behind second-placed Mauritania.

Following a cagey opening 10 minutes, it was the hosts who spurned the first real chance when Thulani Hlatshwayo wasted a free header.

Cameroon appeared happy to sit deep and invite South Africa on to them, and Aboubakar should have put them ahead shortly before the half-hour mark when he failed to make contact with a free-kick from close range.

Thulani Serero and Tokelo Rantie then linked up well for Bafana Bafana but the former failed to find his strike partner with a simple pass and the chance went begging.

Cameroon skipper Aboubakar was again uncharacteristically wasteful when the visitors broke away, with the Porto striker firing over the bar.

Aboubakar, who had already been booked, then escaped with a telling off from the referee after a poor tackle on Jale that was in all likelihood borne out of frustration after his misses, as the teams were again left to settle for a point.