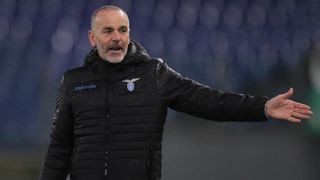 Lazio head coach Stefano Pioli acknowledged his players are struggling for confidence ahead of their Europa League last-16 tie with Sparta Prague.

After finishing third in Serie A in 2014-15, the capital club are down in eighth position this time around – a massive 18 points behind rivals Roma, who now sit in the position Lazio occupied last season.

Pioli's side have only won two of their last nine matches in all competitions ahead of their trip to the Czech Republic for Thursday's first leg, with the return match to follow on March 17.

Lazio go into the game on the back of a 1-1 draw at Torino on Sunday which did not impress an under-pressure Pioli, who needs a Europa League run to save his team's campaign.

"We got the wrong approach to the game and it's not the first time this has happened either," he told Sky Italia.

"We are proving that we have lost our balance and confidence, as we really struggled after the opening goal. We unravelled, inviting the Torino counter-attacks.

"We could have equalised earlier and even won this match. I had to make two changes at half-time to rediscover our balance, especially when defending.

"Our aim is to improve our status in the Serie A table and go forward in Europe."

Lazio are the only Italian team remaining in the competition following Napoli's elimination at the hands of Villarreal and Fiorentina's defeat to Tottenham in the previous round.

After failing to qualify for the Champions League, Lazio topped Group G in this tournament without losing a game to reach the knockout stages, where a strong performance in the second leg of their last-32 tie saw them battle to a 4-2 aggregate victory over Galatasaray.

Sparta, meanwhile, were also undefeated in the initial stage of the competition after failing to reach the Champions League. They finished second behind Schalke in Group K and a comfortable 4-0 aggregate win over Russian outfit Krasnodar followed.

While Lazio are short of form, the runners-up in last season's Czech top flight have won all three league matches since the mid-season break, with a cup defeat to Slovan Liberec their only blip.

Sparta are unbeaten in their last four home matches against Italian opponents, but their overall record against them in Europe is only three wins from 22.

Victory in the tie would see them match their best-ever run in the competition after they reached the UEFA Cup quarter-finals in 1984.

Lazio's best performance in the tournament saw them finish as runners-up, losing to Inter in the 1998 UEFA Cup final.

Hosts Sparta welcomed back striker David Lafata from injury as he scored in Sunday's win over Jablonec, while Costa Nhamoinesu will return from suspension to play in Europe.

Lazio have been without defenders Santiago Gentiletti (knee), Stefan Radu and Dusan Basta (both thigh), but Mauricio will return after being banned against Torino.