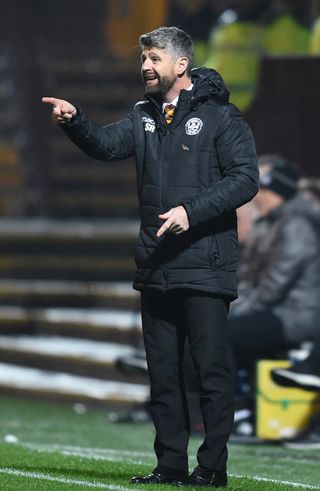 Stephen Robinson praised the strength in depth of his squad after his double substitution inspired Motherwell to a crucial three points against St Johnstone.

With the game goalless and delicately poised on 63 minutes, Robinson introduced Elliott Frear and the returning Chris Cadden for the ineffective Jake Hastie and Gboly Ariyibi. The change immediately paid dividends as Frear fired the hosts ahead with an excellent low strike just six minutes later to the delight of his manager.

Robinson said: “Elliott’s probably the most unfortunate player in the squad, he’s the best player in training every day.He was my best player against Ross County and Hamilton when we weren’t playing particularly well but he was unfortunate to get an injury and the two boys who came in were very good.

“But the lesson is you can’t rest on your laurels and we have good options in the squad now. At half time we wanted to see a few more runners beyond the ball, people getting into the 18-yard box and beyond Curtis Main.

“I thought second half, especially when the three subs came on, we got that penetration through Elliott and Chris while Carl McHugh gave us that bit more composure in the middle of the pitch.”

Motherwell were dominant throughout proceedings but looked far more dangerous going forward after the double substitution and David Turnbull doubled the hosts’ advantage on 80 minutes.

The Scotland Under-21 international majestically dummied his way past a defender before firing low across Zander Clark.

Whilst Motherwell’s top-six hopes remain alive, St Johnstone’s are dead and buried but it could have been so different had Liam Craig scored an early penalty. Tommy Wright was furious with his team’s performance and bluntly insisted the midfielder is now off penalty taking duties.

Wright said: “I didn’t think there was much in the first half but we got the penalty. It will probably be the last penalty Liam Craig will ever take.He’s missed a few recently. We should have gone 1-0 up. Motherwell maybe started the game better than us but we were in total control in the second half.

“But what happened after that was totally unacceptable. There was no response or anyone willing to stand up. There was plenty of time left in the game. Any defeat is disappointing but the lack of a reaction is unacceptable

Any defeat is disappointing but the lack of a reaction to going a goal down was the most disappointing thing.It’s been a tough run but that last 20 minutes epitomised it.”